Greetings, friends! I’m updating those of you in the loop about exciting events planned for the coming months. March will see the premiere of two chamber works of mine. Chaconne, for the intriguing combination of trumpet, clarinet and piano, was written last summer and receives its debut at Southeastern’s Pottle Auditorium by faculty members Logan Place, Victor Drescher, and Henry Jones. Later that month, Brian Gallion debuts Intervals II for tuba and piano at the ITEA South Central Conference at the University of Central Arkansas. I’m very excited about both of these pieces, because they both share an intimate musical grammar that focuses on a certain unresolved sonic landscape from which I can’t seem to escape.

April will see the premiere of what I feel to be my first real “solo” piano piece, Fast Flies Meanwhile The Irreparable Hour, As Point To Point Our Charmed Round We Trace, written for Mabel Kwan who will be making her triumphant Louisiana debut at Southeastern Louisiana University and then at Cafe Istanbul in New Orleans as part of our Versipel New Music Concert Series and in association with FOCI Arts and our dear friend, composer Ray Evanoff. Both Mabel and Ray will also be giving a talk at Southeastern about their collaborations and artistic output. It is indeed exciting to be working with Mabel Kwan, an artist of exceedingly high caliber. My work is, as are all the works on the programs, a tribute to her talent. 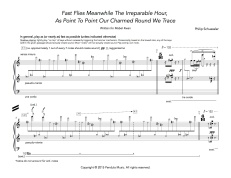 Additionally, later that month, my tuba-euphonium quartet Rube-Goldberg Variations will receive a premiere at Southeastern. More information on that soon!

Thanks for taking the time to learn about what’s coming up in my musical life! I look forward to sharing my music with you very soon! Oh, I should also mention that the recording of Embers: Music For Saxophone with Piano and Electronics is currently available for purchase on Amazon, Target, Arkiv, and various other online outlets.